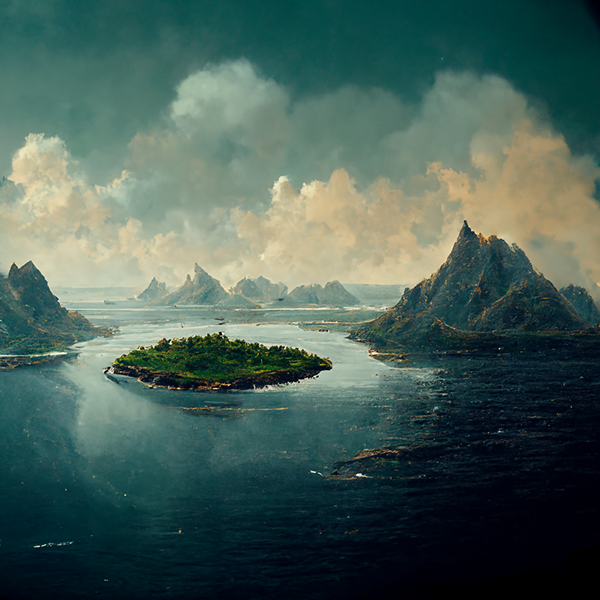 The application of international waters can be a tricky subject. For most countries, the general rule of thumb is a country’s water-boundaries extend 200 nautical miles in the seas.

Well, that’s the case of an amusing little micronation called The Principality of Sealand located just off the coast of England.

During WW2, the British government constructed several forts in the middle of the causeway between France and England. They did this to deter and combat mine-laying enemy Nazi aircraft.

One of these bad boys was called HM Fort Roughs. It used to look like this back in its prime:

This military installation was abandoned by Her Majesty’s military in 1956 because they no longer had any use for it.

But one man’s trash is another man’s treasure, right?

And there was one group of people who thought this abandoned giant chunk of rusty metal was a hidden treasure in disguise.

They called themselves radio pirates and they were amusing.

Back in 1965, a man named Jack Moore and his daughter called up their real estate agent one day. They had an unusual request.

They wanted to pack up and ship out to the middle of the English Channel and were inquiring on the legality of doing so.

They were part of a pirate radio station called Wonderful Radio London — one of the first commercial radio stations to broadcast into the UK.

At the time, the UK only allowed government stations for a bunch of different reasons we won’t get into.

So, some enterprising individuals started out-rigging old ships just outside of UK territorial waters — and blasted unrestricted music, commentary, and news into the UK — in a legally grey area known as pirate radio.

You might think this is kind of silly and more of an act of principle than an act of entrepreneurship — but by the time they closed down they had 12 million UK listeners and four million on mainland Europe.

A listener base of 20% of an entire country’s population isn’t anything to sneeze at when it comes to advertisers.

And that’s exactly why a Texas entrepreneur named Don Pierson started this particular pirate radio station in the first place.

To make money out of a huge legal loophole.

When Jack and his daughter ‘moved’ into the HMS Fort Roughs, they did it at the behest of the radio station.

The station was worried about three things:

The problem they didn’t account for was Jack wasn’t alone in his thinking.

A man named Paddy Roy Bates also had his eye on the fort and made it his (successful) mission in 1967 to acquire it.

He kicked out yet another group of pirate radio wannabes to claim the relic structure. To make matters even more ridiculous, he also had the balls to declare the fort an independent nation.

And voila, the Principality of Sealand was born. Well, sort of.

Outside of Her Majesty’s Government, no one really gave two hoots about this “independent nation.” Just another eccentric citizen most people thought.

Amusing at best. Pitiful at worst.

But remember the most important piece to this story, this fort was located in international waters.

Paddy Roy Bates occupied the fort to broadcast pirate radio — but around the time he did so in 1967 — the UK finally made it illegal.

In fact, he never actually transmitted anything even with all the expensive equipment he bought and transported over.

But because of that little glitch of being only 12 nautical miles off-shore yet still in international waters — the structure had an incredibly strange path forward over the next few decades.

There is a lot of strange history on this tiny little manmade structure.

Here’s a shortened timeline of the next decade:

In 1967 — Paddy Roy Bates’s son intelligently threatened a British navy vessel by firing a flare gun at it. He later went to court for it (as a UK citizen) and somehow was let off because the incident wasn’t in UK waters.

In 1975 —Paddy Roy Bates went all-in and created a constitution, a national flag, a national anthem, a currency, and passports for his little piece of rusting concrete.

In 1978 — Bates and his wife decided to take a lovely little vacation back home, leaving their son and some friends behind to stand guard.

And last but not least — a businessman named Alexander Achenbach decided to hire a bunch of mercenaries to invade the structure while Bates was away.

Why? Because he felt he was the Prime Minister of Sealand.

The German and Dutch mercenaries attacked with a bevy of speedboats, jet skis, and helicopters.

And even more unbelievably — Bate’s son Michael is apparently a super-soldier.

He was able to use a small weapons stash on Sealand to repel the entire invasion force and capture their leader — Achenbach.

Apparently, all this kerfuffle was over a business disagreement between Paddy Roy Bates and Achenbach. Bates wanted to create an offshore casino resort on Sealand and Achenbach didn’t.

What happens when you rebel and try to take over a country?

Bates chose to accuse Achenbach of treason, an act against his fake country of Sealand. Instead of the usual treason trials that we might read about, he chose to go another route of justice — straight up ransom.

Bates said he’d only release him for his treachery if Achenbach paid a $35,000 ransom.

After a lot of uproars and even a visit by a German diplomat — inadvertently giving some pseudo-credibility to the micronation — he relented and paid the sum.

Achenbach now attained his freedom and went back home to Germany. He then did the next logical thing such a man would do.

He declared a government in exile.

Achenbach’s pursuits to retake the island through this government in exile went so far as to even be involved in the infamous Panama Papers.

But alas, he never did retake his little metal island.

The next few decades

Remember above in 1975 King Bates decided to start creating currencies and passports for his little country?

Well, he went on to sell a lot of them.

Over 150,000 were issued by 1997 alone! Unfortunately, he had to stop and rescind the validity of every previously issued passport by that point.

Apparently, they were selling all of these doubly fake passports and plates to drug dealers around the world. They ended up using these false identities in places that weren’t too aware of fake countries and all their eccentricities.

And by doing so, they managed to avoid drug checks, criminal proceedings, and countless other crimes they couldn’t normally get away with.

Due to the slowly mounting pressure of the strikingly illegal nature of things, it eventually led Bates to cancel every single one of the passports issued to that point.

As if that mattered at all.

The last couple of decades continued to involve weird events on this tiny structure: